Humpback Whale Watching in Waters Off Kauai During Peak Season

How often do you get the chance to watch a once nearly extinct animal frolic in the wild? Come to Kauai, Hawaii this winter for the thrilling experience of Humpback whale watching. These mysterious and majestic creatures migrate 6,000 miles annually from the icy Alaskan waters to mate and give birth in the warmer Hawaiian waters. Take advantage of a one-of-a-kind opportunity to glimpse them up close by vacationing on Kauai during the peak whale watching season that spans January to March.

Every winter, visitors to Kauai have a special opportunity. Humpback whales migrate to Hawaii's warm sea to play, mate, give birth and nurture their young.

Called Kohola in Hawaiian, these whales occupy a special place in Hawaiian culture. We almost lost them forever when whaling brought Humpbacks to the brink of extinction. Their population plummeted below 1,000 in 1965. Strict moratoriums on hunting them in 1966 allowed the massive mammals to rebound to about 80,000 today. Pre-whaling, they numbered an estimated 125,000.

The U.S. Congress protected these endangered mammals even further in 1992. One of the designated areas important to the nearly 6,000 Humpbacks is the Hawaiian Islands Humpback Whale National Marine Sanctuary.

Few sights on Kauai rival viewing these mammoth creatures, which grow between 43 to 52 feet and tip the scales at as much as 79,000 pounds. You can spot them by their distinguishing features — long pectoral fins and bumpy heads. 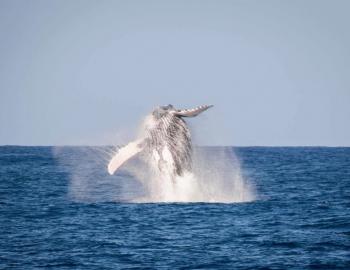 We recommend Captain Andy’s, whose captains are very knowledgeable about Humpbacks and keep track of all the whales’ hot spots off...